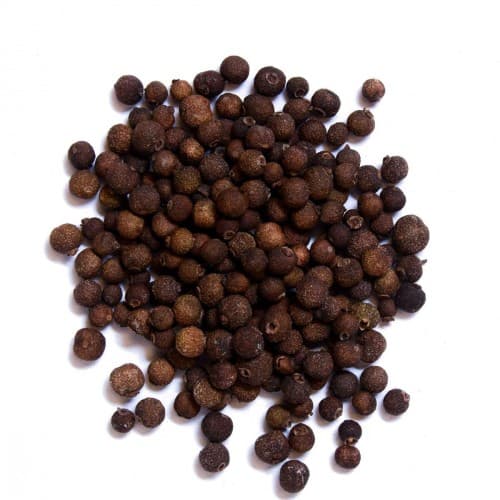 A popular ingredient in Caribbean cuisine, Allspice is used in a variety of sweet and savory recipes around the world, adding a pleasant kick to dishes. Allspice also has a long history in herbal medicine where it has been brewed into a tea to relieve colds, ease menstrual cramps, and calm an upset stomach. Allspice balms have been applied to bruises, sore joints, and muscle aches. The berries contain a chemical called eugenol, which might explain some of its traditional uses for toothache, muscle pain, and as a germ-killer.

Allspice is one of the spices that goes by many names! It’s also known as pimento, Jamaican pepper, myrtle pepper, new spice, pimento, and clove pepper. It was originally named “pimento”, the Spanish word for pepper, by 16th century explorers due to its dark brown, wrinkled skin. It was later renamed Allspice by the English because it has hints of pepper, cloves, cinnamon, nutmeg, and juniper.

Be cautious taking All Spice when taking medications that slow blood clotting (Anticoagulant / Antiplatelet drugs). General Recommendations
Consult with a qualified healthcare practitioner before using herbal products, particularly is you are pregnant, nursing, or on any medications.****This statement has not been evaluated by the Food and Drug Administration. This product is not intended to diagnose, treat, cure, or prevent any disease.****

Teas are like people, each is different and there is no one way to prepare a cup. Use this as a starting point for brewing this tea as you explore its unique characteristics. You may find different times of day or moods, you like to use more or less tea, brew it for a different amount of time….Whatever you do, have fun discovering your perfect cup!